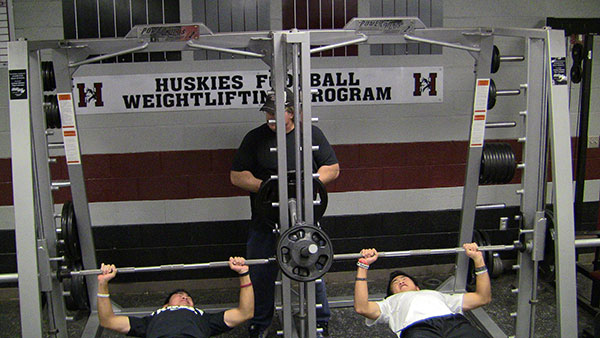 Dan’s heart and passion is to reach out to the youth of America to promote and develop exercise, fitness and conditioning programs as well as to design and implement programs to develop life skills, build body, mind and character in today’s youth. Dan Goddard won numerous awards as a power lifter, including being named the North American Bench Press Champion in 1979. He was ranked in the World’s Top Ten Bench Pressers in the late 1970’s through the mid-1980’s. Highly acclaimed as a power lifter in Iowa, he held 22 Iowa State Bench Press Records, was a 7-time Iowa State Power Lifting Champion, and a 5-time Regional Power Lifting Champion. In 1979, Dan was recognized as the most Outstanding Athlete by the Amateur Athletic Union (AAU), for power lifting and good sportsmanship and was inducted into the AAU Hall of Fame in 1980.

Dan was the Assistant Strength Coach for the University of Illinois and although his main focus was on football, he was also given the opportunity to work with men and women in all other sports.

When serving with Athletes International Ministry in Phoenix, he implemented AIM Higher, a youth program within the South Phoenix area. Dan managed the program and coordinated community-building events with other agencies. AIM Higher’s After-School Basketball League served 500 boys and girls in grades 5,6,7 and 8 who participated weekly at the South Mountain YMCA. After each game, all the players met together for refreshments while Dan taught a 30 minute “Rap Session” with the students and coaches. The youth learned about Building Body and Character, life skills, the importance of staying in school and other topics such as abstinence and the dangers of drugs, alcohol and tobacco.

Dan also directed its’ annual All-Star Baskertball Game and Block Party with 3,500 people in attendance. He worked tirelessly to coordinate school assemblies to present the program to over 10,000 youth in the South Phoenix area.

Dan was the Program Director for an after-school golf program at the Thunderbird Golf Resort, which is now known as the Vistal Golf Club. Dan’s program taught 7th and 8th grade students as well as special-needs students how to play golf with the help of many volunteers.

After golfing, the youth enjoyed refreshments while Dan and his wife Cookie taught them using a Character Building Program.

Dan has consulted and served as the Youth Sports Program Director for many organizations, including the South Mountain YMCA. He was the Director of a fitness training program at Adobe Mountain Juvenile School, where he was recognized for his faithful service by the Arizona Department of Corrections. Several years ago, the Roosevelt School District recognized Dan’s “invaluable services and assistance,” and he continues that relationship even today.

Dan conceived and was the Program Director for Power Fitness for Youth. As he watched childhood obesity rise to epidemic levels in America, Dan partnered with Americans for a Better Tomorrow, the local South Mountain YMCA and the Roosevelt School District to create a program that bussed 6th, 7th and 8th graders, including special-needs students, to the YMCA twice a week during the school day. There, students participated in 30 minutes of weight circuit training and 30 minutes of aerobics. On another day during the week, Dan went to the schools to teach for an hour about building body and character from a curriculum he developed specifically for this age group. At the end of each 9- week session, school assemblies were held at each participating school to honor students that graduated from the program. T-shirts, medals and certificates were given out along with special awards such as Best Character, Best Attitude, Most Improved, Best Role Model, and the most prestigious of all – the Power Plus Award.

Very early in his career, Dan was acknowledged as a leader in the fitness community when he implemented Isokinetic Principles in his Kansas City, Missouri, fitness centers. Today, Dan is still running ahead of the pack as his patented Power Plus 2 Two Man Bench Machine encourages “Srength and Unity” among all men and women athletes as they combine their strength to perform side-by-side team lifting.

The Power Plus 2 Two Man Bench Press was a vision from God as Dan focused on a way to reach out to the youth of America, which remains his heart and passion today. His wife Cookie is CEO of Americans For a Better Tomorrow – Reaching Tomorrow’s Leaders Today. The vision for Americans For a Better Tomorrow non-profit program is promoting and developing programs for inner-city children and families that develop life skills, build character and bring hope to the community. Cookie believes that when you put a child first, you put the future first. Cookie shares Dan’s passion for youth and since 1990, she has also worked with inner-city youth. Her signature community event for the last 15 years has been the annual Holiday Fun Fest, where hundresds of deserving families are fed as they are taught the true meaning of Christmas and two thousand filled stockings are distributed to inner city youth. Dan and Cookie reside together in South Phoenix, Arizona.